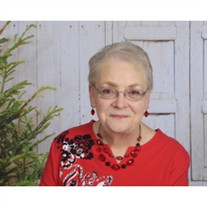 Funeral services for Cherlyn Ann Jones, 70 of Skiatook, Oklahoma were held Friday, August 25, 2017 at 10:00 a.m. at the United Methodist Church, in Skiatook with Pastor Susan Whitley officiating.               Interment in Osage Garden Cemetery in Skiatook, Oklahoma was under the direction of Peters-Stumpff Funeral Home.  Casket bearers for the service were Bobby Rosser, Don Magruder, Burl Forbes, David Shaw, James Prather and Chuck Allred.  Honorary casket bearers were Vernon Fuller and Tom Hobza.  Musical selections for the service were "The Old Rugged Cross" and "The Hymn of Promise" with vocalist Robin Edens, Cathy Allred and Beverly Dollar and pianist Tish Burrel.               Cherlyn passed away on August 22, 2017 in her home in Skiatook, Oklahoma.  She was born December 6, 1946 in Enid, Oklahoma to Vernon and Lola (White) Hannaford. She was a graduate of OKC University in 1968 where she received a bachelor's degree and was a Rainbow Girl and a member of the Delta Zeta Sorority. Cherlyn married Dennis Jones on June 10, 1967, he preceded her in death on September 27, 2011.  Cherlyn and Dennis lived in Skiatook for 11 years before moving to different towns while Dennis did his ministry work.  They moved back to Skiatook in 1997. She is survived by two daughters: Rachael Jones, Christina Bertwell both of Skiatook; Corinna Redfearn whom she loved like a daughter, four grandchildren: Dustin and Dillon Odom, Mallory and Bellamee Bertwell, and three nieces. She was preceded in death by her parents, husband Dennis, granddaughter Bethaney Odom and a sister Margie Lee Brakhage.   In lieu of flowers donations can be made to the Skiatook United Methodist Church.

The family of Cherlyn Ann Jones created this Life Tributes page to make it easy to share your memories.