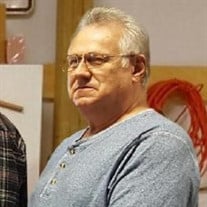 Charles “Chuck” Edward Smith, 66, of Dewey, Oklahoma, passed away, June 2, 2022, in Bartlesville, Oklahoma. He was born on August 20, 1955, to Edward “Sonny” Augustus Smith and Neva Mae (French) Smith in Coffeyville, Kansas. Chuck spent his life in the Dewey and Wann area and graduated from Copan High School, after school, he met his loving wife Ethel May Sturgeon, and they were married on March 5, 1976. He had an adventurous career with a few different vocations, he became an officer with the Washington County Sheriff’s Department, and the Dewey City police for fourteen years, he also worked at Warner Music and Playmore Music, as well as owned and operated Smitty’s Music for twelve years. He had many notable accomplishments and hobbies that included being a certified gun instructor, coroner, an avid musician, a stage musician for over twenty years, a motorcycle enthusiast, and a firearm instructor. Chuck is preceded in death by his parents, Sonny and Neva, his son, Kennith Eugene Smith, and his brother David Smith. He is survived by his wife, Ethel, Son Michael Smith, grandchildren Dalton, Christopher, Kaden, and Maegan Smith, Siblings Norman and Neva Smith, Wade and Donna Smith, Wayne and Nancy Smith, Tim and Lori Smith, Bobbi and Charlie Riggs, Sister-in-law Pam Smith, and numerous nieces and nephews. He will be sorely missed.

The family of Charles "Chuck" Edward Smith created this Life Tributes page to make it easy to share your memories.