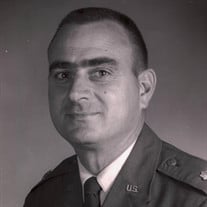 Lieutenant Colonel Charles R. Price, Sr., 91, entered into heaven on Friday, August 20, 2021, with family by his side. Lt. Col. Price was born on February 8, 1930, in Nowata, OK, to the late Orie and Hazel (Hagan) Price. In 1947, while still attending Nowata High School, he joined the Oklahoma National Guard, exiting as a Staff Sergeant of the 279th Infantry Battalion, to join the Air Force in 1948. At the start of his 25-year Air Force career, Lt. Col. Price served as Crew Chief on a B-25 aircraft, while stationed at Vance Air Force Base. It was during this time he married the love of his life and high school sweetheart, Joan M. Bowden, later welcoming their four children, Lucinda, Majorie, Merri and Charles R. Jr. into their lives. Price completed Officer Candidate School in 1953. After earning his Pilot Wings, Price spent the next 5 years as a copilot and aircraft commander on a KC-97 tanker. Beginning in 1965, Price began his first of three tours in Vietnam, flying 16 sorties, four of these completed in only two days, in the month of October 1965 for the war efforts. He ultimately received the Bronze Star Medal for his exemplary leadership and devotion to duty during armed conflict. During his military career, Price received several awards including the Bronze Star Medal, Air Medal, and the Air Force Commendation Medal with One Oak Leaf Cluster. In total, Price flew over 5000 hours in 10 different types of aircraft during his career. After returning from Vietnam, Lt. Col. Price spent the last years of his career as the Commander of the 305th Air Mobility Wing Strategic Air Command in Little Rock, AR. In September 1972, at the rank of Lieutenant Colonel, Price retired from the Air Force after 25 years, six months and four days serving his country during both Korea and Vietnam. Price’s service to the public continued after his retirement. He was a past President of 10-33 Ambulance Service, President of the Nowata Public School Board, member of the American Legion Post 101, lifelong 5th generation member of the First United Methodist Church, and an active member of the Methodist Men. Price was an avid Nowata Ironmen football and basketball fan, often providing breakfast to hundreds of players during his 40-year tenure with the Methodist Men. He will be remembered as an active member of his community both in Nowata and at Green Country Village in Bartlesville. Price was a devoted husband to his wife, Joan, of 71 years, a proud father and the gentlest of giants to his 10 grandchildren, 26 great grandchildren and three great-great grandchildren. He is survived by his wife, Joan; his four children, Lucinda Price, Majorie Fuller-Parrish, Merri Lawson and husband Randy, Charles R. Price, Jr. and wife Diane; his sisters Mary Price Ballard and Marjorie Price Parrish; 10 grandchildren, Lisa Mark Cops (Terry), April Dively (Jonathan), Cara Harney (David), Aaron Lee Lawson, Sheppard Fuller (Claudia), Angela Osborn (Doug), Carissa Pierce (Tyler), Erin Price-Haynes, Alisha Chambers (Ian), and Natalie Wood (Skyler); 26 great grandchildren, three great-great grandchildren, and many nieces and nephews. Preceding him in death are his parents, Orie and Hazel Price, his sister Jeanette Sneed, nephews Stevie Brewer, Roger Sneed, Adam Noel Brewer, and Jeffrey Brewer. In lieu of flowers, please make a donation to the American Legion Post 101 or American Legion Auxiliary Unit 101. Services are under the direction of Nowata Stumpff Funeral Home and will be livestreamed via Nowata United Methodist Church Facebook page.

The family of Lieutenant Colonel Charles Ray Price Sr. created this Life Tributes page to make it easy to share your memories.

Send flowers to the Price family.