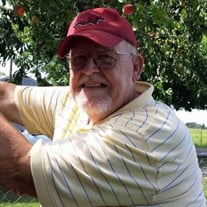 Today, July 22, 2020, Jesus knocked on our door to come and take our dad away. Charles “Charlie” Perry, Age 89 passed from this world and arrived at his heavenly home. Charlie was born in Cedar Vale, Kansas on March 18th, 1931, to Hazel and Erles Perry. He was the youngest of 9 children. Charlie graduated high school in 1948 and went on to the United States Air Force where he became a Knight of the Bluenose. He was stationed in Thule, Greenland where he became a weatherman with a 98% accuracy!!!! After being honorably discharged from the service, Charlie went to work in Wichita where he met his bride-to-be Neva Galloway. They were married 59 years when Neva passed away. From their marriage, they had 3 children, Gary, Brenda, and Michelle. Charlie went to work at Total Petroleum and retired in 1992. Charlie enjoyed his gardening, playing Santa for the Nowata Children and in parades, playing Domino's and Yahtzee with his "beauty" Radine Stinnett. Charlie is survived by one brother, Don Perry of Ark. City, Kansas; daughters Brenda Perry of Kooskia, Idaho, and Michelle and Wendell Abbott of Nowata, Oklahoma. Charlie had 5 grandchildren, Brett and Jolene Liess of Casterville Texas, Cody Perry of Kooskia, Idaho, Danielle Thomas of Nowata, Oklahoma, Dylan Thomas and Harley Frye of Nowata, Oklahoma, Brant and Dyani Abbott of Mavern, Arkansas; 4 Great Grandbabies, Maya Leiss, Anna Dean McGuire, Presley Jo Thomas, and Sawyer Abbott; his partner, Radine Stinnett, aka Beauty, and a host of friends, family, and Church Family. Charlie was preceded in death by his wife, Neva Perry; his parents; 2 infant siblings; 3 brothers, James Perry, Carl Perry and Gerald Perry; 2 sisters Maxine Earle and Marie Shipp and 1 son Gary Perry.

The family of Charles "Charlie" Mortimer Perry created this Life Tributes page to make it easy to share your memories.

Send flowers to the Perry family.