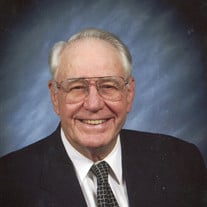 Charles Joe (Charlie) Martin was born July 8, 1920 to Roy M. Martin and Cumilla Martin in Quitman, Arkansas. He graduated from North Little Rock High School and attended the University of Arkansas where he met the love of his life, Mary L. Staats. They were married on April 24, 1942 and remained married for seventy-eight years until Charlie’s death on July 20, 2020. Prior to graduation from the University of Arkansas, Charlie left school and joined the Army Air Corp. He served as a “hump pilot” flying supplies from India to China to support the Chinese army and the Flying Tigers. Following WWII, Charlie and Mary moved to Bartlesville, where Charlie went to work in the oil fields for his father-in-law Carl W. Staats. In 1960 Staats purchased a large cattle ranch near Sedan, Kansas. In 1964 Staats, who was in ill health, turned most of his business assets over to Charlie and Mary. Charlie was a very enthusiastic rancher, and eventually served as President of the American Hereford Association. He sold the ranch in 1998 and began an active retirement. During his retirement Charlie played trumpet in various community bands, was the regular bugler for the James H. Teel Post 105 honor guard, received the status of Life Master in duplicate bridge, played gin rummy regularly at Hillcrest Country Club, and finished his degree from the University of Arkansas at age eighty-seven. Charlie was a member of St. Luke’s Episcopal Church, a member of Bartlesville Rotary, and served for years as a member of the Union Bank & Trust Executive Committee. Charlie was preceded in death by his parents and in-laws, and by his son, Charles J. Martin, Jr. He is survived by Mary, of the home, sons Stephen Martin and Robert Martin, seven grandchildren, and twelve great grandchildren. Charlie will be honored at a private funeral at St. Luke’s Episcopal Church on August 6th.

Charles Joe (Charlie) Martin was born July 8, 1920 to Roy M. Martin and Cumilla Martin in Quitman, Arkansas. He graduated from North Little Rock High School and attended the University of Arkansas where he met the love of his life, Mary L.... View Obituary & Service Information

The family of Charles Joe Martin created this Life Tributes page to make it easy to share your memories.

Send flowers to the Martin family.