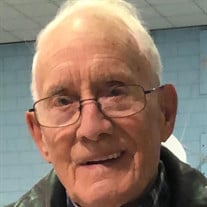 Charles Leslie Liston, 88, of Dewey entered his heavenly home on Saturday, November 6th at his residence in Dewey, Oklahoma. Funeral services will be held at 10:00 a.m. Wednesday, November 10th, at the First Baptist Church in Dewey where Charles had been a member for many years. Pastor Mark Wright will officiate. Interment will be held in the Dewey Cemetery under the direction of the Stumpff Funeral Home and Crematory. Visitation for family and friends will be at the Stumpff Funeral Home on Tuesday, November 9, 2021 from 2 PM until 8 PM> Charles was born July 10th, 1933 in Nowata, Oklahoma, the son of John and Wanda Jean Liston. After graduating from Nowata HS he enlisted in the United States Air Force and was stationed at the Francis E. Warren Air Force Base, Wyoming in 1953 and was later transferred to the Fourteenth Air Force Robins Air Force Base, Georgia until 1957 when he was honorably discharged. At which time he returned to the family farm in Nowata and went to work at Reda Pump working in various departments. Charles married the former JoEllen Mitchell, August 28th, 1958. He and JoEllen resided in the Bartlesville, Dewey area where they attended church and began to start a family. After retirement Charles worked various part time jobs, including Sears Repair Center and as a security guard at Schlumberger. After his second retirement Charles enjoyed working in his garden, raising cattle, goats, emus and chickens, reading and watching westerns, fishing and hunting with his son, watching bull riding and Jeopardy with his daughter. He especially loved doing anything with his family, particularly attending events that his great granddaughters were involved in. Charles was always willing to give a helping hand to family, friends, or anyone in need. Charles is survived by his daughter Donna Liston-Pippin of Dewey; son, Joel Liston and his wife Paula of Nowata; Grandchildren Tasha Posch and husband Dietrich of Bartlesville, Cole Liston of Dewey; Great Granddaughters Mela Grace and Ella Joyce Posch; one brother, Dean Liston and wife Will of Bartlesville. He was preceded in death by his parents, wife of the home JoEllen, son Dwight Liston of Bartlesville and brothers Don and Alvin Liston.

Charles Leslie Liston, 88, of Dewey entered his heavenly home on Saturday, November 6th at his residence in Dewey, Oklahoma. Funeral services will be held at 10:00 a.m. Wednesday, November 10th, at the First Baptist Church in Dewey where... View Obituary & Service Information

The family of Charles Leslie Liston created this Life Tributes page to make it easy to share your memories.

Send flowers to the Liston family.