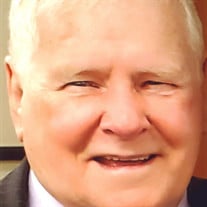 Charles Russell Karr, age 83, passed away on December 3, 2021 in Bartlesville, OK. Charles was born on February 27, 1938 in Great Bend, KS to Harold Karr and Theodosia Violet Meyers. Charles attended North High School in Wichita, KS, he was also involved in the High School Wrestling team, and won two state titles. He worked as a Mechanic/Machinist for years and then became a tool design engineer. He worked on Corvettes and Diesels with his father, Worked as a teacher at 4H teaching horsemanship, and raised horses when the kids were younger. On October 4, 1980 Charles married the love of his life, Shirley Eileen Buck. Charles enjoyed music, played drums, and played with a band locally a couple times a month, and was in a bowling league for years. He was baptized on July 5, 1974 as a Jehovah’s Witness and served many years in Colorado, and Oklahoma. Charles was a great man of love, who will be missed. Charles was preceded in death by his parents; brother, Hank Karr; half-brother, Jerry Karr; wife, Shirley; son, Robert Karr; sister, Shirley Ann Boyd; and stepson, Bryan Wayne Buck. He is survived by his brother, Jimmy Karr of Pennsylvania; sisters, Phylis Adams of Wichita, Jan Ranier of McPherson, and half-sister Karen Cook of Kingman, KS; children, Russell Karr, Dayna Bishop, Rachelle Cox, Susan Karr Seymour, Steven Karr, Step-son DJ Young; and many grandchildren.

The family of Charles Russell Karr created this Life Tributes page to make it easy to share your memories.

Send flowers to the Karr family.