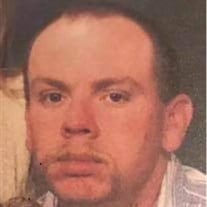 Charles Lamont Grim, of Barnsdall, Oklahoma, died on May 4, 2021. He was born to parents Richard Andrew Grim and Georgia Carter Grim on December 13, 1973 in Bartlesville, Oklahoma. Charlie graduated from Barnsdall High School and was top in his class in autobody at Vo-Tech. He also graduated from Vatterott College for heating and air. He loved cars, and trucks and motorcycles of all kinds. He loved working on them and driving them. He was a truck driver, mechanic, carpenter, and a jack of all trades. If you ever met him, you would have never forgotten him. He could make jokes about anything, kept you laughing all the time. Charlie was a family man all the way, he loved his parents dearly. Charlie and Melissa were married shortly after they graduated high school and have been married for 30 years, they have a beautiful family together. He loved being Papaw to their grandkids and those kids loved him so much. They have made their home in Barnsdall for 12 years. If he were here now, he would tell you to remember all the good times and the laughs you had together, because even as sick as he was for so long, he always had a smile and a joke to make you laugh. He will be missed by so many and is loved so deeply. Heaven is a little brighter today. Charlie was preceded in death by his Paternal Grandparents Dick and Mary Ann Grim, his Maternal Grandparents George and Evelyn Carter, two grandchildren Riley and Daniel Weeks, Uncle John Carter and Aunt Lory Grim Martin. He is survived by his wife of 30 years, Melissa Kay Grim, son, Tommy Grim of Barnsdall, Oklahoma, three daughters; Shannon Grim and fiancé Chase Weeks of Barnsdall, Oklahoma, Jatanna Grim and fiancé Lucas Scharnhorst of Barnsdall, Oklahoma, and Shakota Grim and fiancé Collin Beats of Barnsdall, Oklahoma, three grandchildren; Mason Grim, Charlie Kay Scharnhorst and expecting their third grandchild, Tucker Beats, his parents; Andrew Grim and Georgia Carter Grim of Barnsdall, Oklahoma, Charles’ brother: Richard Grim; niece, Clerissa Mae Grim of Bartlesville and nephew, Layne Grim of Oolagah and numerous aunts, uncles, and cousins, and many friends. Services will be held at the First Baptist Church in Barnsdall, Oklahoma, at 1 pm on May 10th, 2021. Services will be officiated by Reverend Darrel Brewer of Catoosa, Oklahoma. Interment will be in the Ethel Reece Cemetery at Barnsdall directed by the Stumpff-Barnsdall Funeral Home. Pallbearers will be Terry Martin, Jay Carter, Kevin Lyons, Chris Lyons and Kenny Halford. Honorary Pallbearers will be Bryan Goad, Doug Burrows, Harold Martin, Joel Wells, Thad Wells and Austin Frazier

Charles Lamont Grim, of Barnsdall, Oklahoma, died on May 4, 2021. He was born to parents Richard Andrew Grim and Georgia Carter Grim on December 13, 1973 in Bartlesville, Oklahoma. Charlie graduated from Barnsdall High School and was top in... View Obituary & Service Information

The family of Charles Lamont Grim created this Life Tributes page to make it easy to share your memories.

Send flowers to the Grim family.