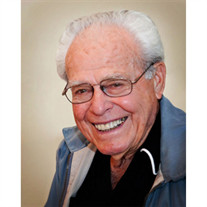 Memorial services for Carl Gotcher, 90 of Ramona, Oklahoma will be held Thursday, September 13, 2012 at 10:00 a.m. at Peters-Stumpff Funeral Home Chapel. Interment in Ramona Cemetery is under the direction of Peters-Stumpff Funeral Home. Carl passed away on August 20, 2012 at his home in Ramona. He was born July 21, 1922 in Tulsa, Oklahoma to Harvey Andrew and Weltha (Wilkens) Gotcher. Carl spent his life working hard and succeeding in his endeavors. After being raised in West Tulsa, where the River West Festival Park now sits, he was a GI in WWII, serving at the Panama Canal. Working as a machinist for Power Machinery, Co. and later as an Engineer/Vice President of Dynmac Corp., he was regarded as an expert in the pipeline compressor and heat exchange field. Carl was the man wanted, to make certain the job was done right. Together with his wife Trudie, they raised their family in the Union area, before purchasing a pecan farm in Ramona, in 1964, and later retiring there, to turn his one-time hobby in to a life-long love affair with pecans. Hidden Valley Pecan Farm was their pride and joy. Carl's family meant everything to him. And, on his 90th birthday, a majority of his very large family, along with several friends, watched as he tandem skydived from 10,000 feet. He loved it and was ready to go again. His family will cherish that memory forever. Dad, Grandpa, Great-Grandpa, Great-Great-Grandpa were just a few of the many titles to a man loved, admired and respected by so many. He is survived by his children: Richard Gotcher and wife Nancy of Scottsdale, AZ; Rex Gotcher and wife Susan of Broken Arrow; Pat Harris and husband Grant of Skiatook; Ann Marie Havrilla, 15 grandchildren, 39 great grandchildren, and 5 great-great-grandchildren. He was preceded in death by his parents, his wife Trudie and a son John Gotcher. In lieu of flowers donations can be made the Salvation Army in Tulsa. www.Peters-stumpff.com

The family of Carl Gotcher created this Life Tributes page to make it easy to share your memories.

Memorial services for Carl Gotcher, 90 of Ramona, Oklahoma will...

Send flowers to the Gotcher family.