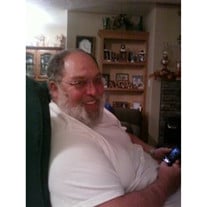 Memorial Services for Carl Andrew Burgess, 63, of Sperry will be held Tuesday, November 26, 2013 at 2:00 p.m. at the Burgess family residence in Sperry, Oklahoma with Frank Brummett officiating. Musical selections for the service are "Daddy's Hands" and "Lead Me Home". Carl passed away November 21, 2013 at the Claremore Veterans Center. He was born on June 7, 1950 in Tulsa, Oklahoma, to Jack David and Dorothy Violet (Barber) Burgess. Carl served in the Army during the Vietnam War. He married DeAnn Durbin. He has made his home in Sperry for the last 24 years. Carl worked as an oil pumper and an aircraft mechanic. Carl loved his family and spending time with them. He was always so excited and proud of his children and grandchildren. Carl enjoyed being outside camping, fishing, cook outs, hunting and traveling. He was a softball coach and a preacher. Carl was a devoted husband and loved to make others happy. He was a loved husband, father and grandfather (Pepaw). Carl is survived by his wife DeAnn of the home, four children: Carla Brooks and husband Derek, Raymond Ashlock, Gary Ashlock, Lori Conkling, grandchildren: Baylee Brooks, Dagan Brooks, Kasen Ashlock, Jaylyn Ashlock, Kaden Ashlock, Kalie Ashlock, Ashley Schill and husband Blake, Kayla Conkling, Krysten Conkling, great granddaughter Isabella Schill, and nieces, nephews, aunts, uncles and other family members. He was preceded in death by his parents, a brother Jack Burgess Jr. and two sisters: Dorothy Fine and Lottie Burgess. Cremation services were under the direction of Peters-Stumpff Funeral Home. www.Peters-Stumpff.com

Memorial Services for Carl Andrew Burgess, 63, of Sperry will be held Tuesday, November 26, 2013 at 2:00 p.m. at the Burgess family residence in Sperry, Oklahoma with Frank Brummett officiating. Musical selections for the service are "Daddy's... View Obituary & Service Information

The family of Carl Andrew Burgess created this Life Tributes page to make it easy to share your memories.

Memorial Services for Carl Andrew Burgess, 63, of Sperry will...

Send flowers to the Burgess family.