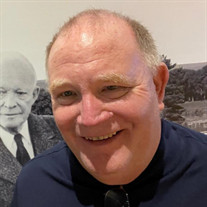 Buddy Lee Taylor went home to Jesus on March 1, 2022 at the age of 65. Buddy was born to Aaron and Margaret Taylor in Wichita, Kansas on April 29, 1967. As a child he was energetic, joyful and ornery. Buddy married the love of his life, Barb Neher Taylor on June 14, 1980, after meeting in college at MidAmerica Nazarene University. A somewhat drifting religion major in college who mostly focused on jokes with classmates, Buddy was inspired by his new found love and quickly began to concentrate on improving his grades and graduating from college. The couple has spent these past 41 years of marriage in a collaborative and caring relationship based on mutual support and a deep love for each other. But Buddy’s love for jokes and humorous storytelling never faded. In fact, he thrived on the exchange of entertaining ideas with friends and family, and his smile would light up their day! Over the course of their marriage, Buddy began to enjoy the role of “Barbie’s” (as he called her) shopping companion, helping carry shopping bags, selecting colors for home decorating and discovering a new interest in arts & crafts. But when at home, Buddy could always be found (and heard) laughing at his favorite old TV shows on TV LAND including Andy Griffith Show, Dragnet and Leave it to Beaver. As a professional for more than 40 years, Buddy worked in the insurance industry. First, in claims for several of the nation’s top corporations and later as an independent contractor operating his own successful risk management business for many years from a home office. Faith in God and engagement with church was central to Buddy’s life. Although Buddy and Barb moved throughout the country during their marriage – from Kansas City to Chicago to San Diego to Bartlesville, Oklahoma – they always found friends at a church home where they were active and discovered volunteer opportunities. Buddy flourished during four international mission trips with his church to Australia, Brazil, Guatemala and Swaziland serving the Lord and sharing the word of God. Travel was how Buddy enjoyed making memories, and he was incredibly generous. A very giving couple, Buddy and Barb took several on overseas trips, as well as hosted vacations for various other family members throughout the years creating lasting memories that will live on forever. Some of the trips were taken to watch his beloved Kansas City Chiefs. Forever a Chiefs fanatic, Buddy traveled from California and Illinois to KC and even to New York for playoffs one year to see the Chiefs play always delighting a friend or relative with a free ticket and special dinner on the town. Buddy was blessed with a loving family. He is survived by his wife, Barb Taylor; sister and husband, Elena and Jim Goldsmith, and many cherished nieces and nephews and extended family. He will always be remembered by his family as a wonderfully generous and caring man. He will be deeply missed by his friends, family and all who knew him. A celebration of life will be Saturday, March 5, 2022 at 10 a.m. at Dewey Church of the Nazarene, 1401 N. Wyandotte Ave., Dewey, OK 74029. Honorary pallbearer will be Buddy’s nieces and nephews: Randy Neher, Julie Galiart, Jacob Wiering, Justin Wiering, Zachary Neher and Natalie Neher. Donations can be made to Dewey Church of the Nazarene.

Buddy Lee Taylor went home to Jesus on March 1, 2022 at the age of 65. Buddy was born to Aaron and Margaret Taylor in Wichita, Kansas on April 29, 1967. As a child he was energetic, joyful and ornery. Buddy married the love of his life, Barb... View Obituary & Service Information

The family of Buddy Lee Taylor created this Life Tributes page to make it easy to share your memories.

Send flowers to the Taylor family.