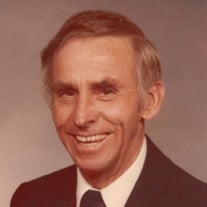 Bruce Smith, 99, joined other members of the “Greatest Generation” on February 11, 2022. He died in The Journey Home, Bartlesville, Oklahoma. He was born to William Hebert Smith and Beulah Mae Smith on February 9, 1923, in Octavia, Oklahoma. He worked alongside his father and brothers in the timber business in Southeast Oklahoma in the mountains he loved. In 1941 he graduated from Smithville High School. Bruce married the love of his life, Betty Jo Fellner on September 9, 1942. Shortly thereafter he began work digging pipeline ditches for the Interstate Pipeline Company. Three months later he was drafted into the Army where he and three brothers fought in many conflicts in the Pacific and European Theaters. Following his honorable discharge in January 1946, the family relocated several times. His strong work ethic resulted in his progress through the ranks of Interstate Pipeline Company. During this time two daughters, Katie and Penny were born. The family moved to Maysville, Oklahoma in 1950 where he shared many wonderful experiences with his family, particularly staying closely involved in all of his adored daughters’ activities. He retired from Conoco as Pipeline Foreman in 1984. They relocated to Bartlesville and enjoyed helping his daughters with a variety of projects, many family events and new golfing buddies. His priorities were anything to do with or for his daughters, their spiritual lives, golfing, time with extended family, job and walking dogs. Older women, Little children, and Dogs seemed to gravitate to him. He was very competitive and enjoyed making every activity a contest. Bruce’s personality was very uplifting, encouraging and made everyone who knew him feel they were the most important person in Bruce’s life. The family were long-time active members of the Methodist Church. Bruce is survived by two daughters Katie (Bill) Griffin and Penny (Doug) Quinn of Bartlesville, sister Gayle Risden of Octavia, Oklahoma, brother Larry Smith also of Octavia, and many nephews and nieces. He was preceded in death by his wife, parents, three brothers W.J. Smith, R.H. Smith, Paul Smith and four sisters Fern Shiver, Billie Keilich, Peggy DuPont and Ruth Brown. Funeral services for Bruce will be Friday, February 18, at 1pm at the Octavia Baptist Church followed by burial at the Octavia Cemetery. Visitation will be Wednesday February 16 9am-7pm in the Stumpff Funeral Home Chapel. The family will receive guests 5-7pm. Service and interment under the direction of the Stumpff Funeral Home. For those who may wish to send a memorial, in lieu of flowers the family asks these be given to The Journey Home 900 N.E. Washington Boulevard, Bartlesville, Oklahoma 74006 or the Washington County SPCA 16620 OK-123, Dewey, Oklahoma 74029.

Bruce Smith, 99, joined other members of the &#8220;Greatest Generation&#8221; on February 11, 2022. He died in The Journey Home, Bartlesville, Oklahoma. He was born to William Hebert Smith and Beulah Mae Smith on February 9, 1923, in Octavia,... View Obituary & Service Information

The family of Bruce Wilson Smith created this Life Tributes page to make it easy to share your memories.

Bruce Smith, 99, joined other members of the “Greatest Generation”...