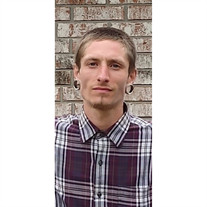 Funeral services for Brett Landon Bowline, 28, of Skiatook, Oklahoma will be held, Friday September 24, 2021 at 10:00 a.m. at Peters-Stumpff Funeral Home Chapel in Skiatook, OK with Dave King and John King officiating. Interment in Osage Garden Cemetery is under the direction of Peters-Stumpff Funeral Home.  Casket bearers for the service are Bill Baker, Brad Hollis, Ty Harper, Kyle Hollis, Taylor Watkins and Cody Francis.  Honorary casket bearers are Gaylen Bowline, Blake Akin, Henry Goodman and Jim Bradshaw. Brett Landon Bowline, "AKA" Bart or Spike, was born June 16, 1993 in Tulsa, OK to Gene and Laura (Harper) Bowline.  At home he was welcomed by his sisters, Josi Birmingham and Molly Bowline.  Brett was raised and educated in Skiatook graduating with the SHS Class of 2011.  He was very talented and worked as a laborer.  He was an especially good landscaper. When he was young, he loved Batman and building shrines all over the yard which were decorated with whatever bottles, vases or junk he could find.  He also liked big junk jewelry which he would wear proudly.  Brett was always very likeable and had many friends.  He had lots of family and friends who will truly miss him. He is survived by his parents, his sisters: Josi Baker and husband Bill, Molly Bowline and fiance' Colton Stevens, nieces Addison and Avery Baker, Khenli Hupman, nephews: Taylor Watkins, Cody Francis and many aunts, uncles and cousins. He was preceded in death by his paternal grandparents Cecil Bowline and Pauline Shryock, his maternal grandparents Ed and Dorothy Harper and a niece Cabrey Stevens. Brett will be missed by all of us. The family asks that any time you see Batman, give Brett a thought.

The family of Brett Landon Bowline created this Life Tributes page to make it easy to share your memories.

Send flowers to the Bowline family.