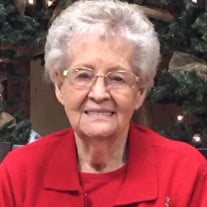 Bonnie Lou (Robertson) Harmon, 92 years of age, passed peacefully from life on earth to life everlasting at sunrise on Friday, October 15, 2021, from the “Journey Home” hospice facility in Bartlesville, Oklahoma. “Rise and Shine and give God the Glory. . .” was a song she frequently sang to visiting grandchildren, and she herself, lived by those words—rising much before 7 a.m. and retiring by 7 p.m. Bonnie was born at home, in Pershing, Oklahoma, Osage County, on June 15, 1929, to James “Monroe” Robertson and Hannah Ellen (Golden) Robertson. Her family moved to a farm in nearby Nelagoney, where Bonnie attended school and graduated high school in a class of three. Immediately after graduation, she “went to town” (Pawhuska), crossed a picket line, and got a job as a telephone operator, joining her older sister and best friend, Leora. When questioned by her Dad about crossing the picket line, she responded that she “didn’t know why they were mad, but she had to have a job.” She would make tough decisions her entire life, with wisdom based on her trust in Jesus. Bonnie married Melvy Gene “Corky” Harmon and together they raised three children: Glenda, Karla, and Mike in Barnsdall, Oklahoma, until The Lord called Corky home, after 57 years of marriage. Bonnie is survived by her children; Glenda Harmon (Tim) Scully of Edmond, OK and Mike (Jeana) Harmon of Dewey, OK; her grandchildren: Chris (Leigh) Scully of Edmond; Haley Scully of Allen, Texas; Jennifer Dilbeck (Derick) Moore of Owasso; Riann Dilbeck (Trent) Swanson of Stillwater, OK; Emily Dilbeck (Josh) Atterberry of Bartlesville; Mindy Harmon (Ryland) Russell of Owasso; Lane Harmon of Austin, Texas. Bonnie’s great-grandchildren: Jordan Scully (Justin) LeGrange, Katie Scully, and Shawn Scully; Kyle Moore and his son, Kasen Moore and Ty Moore; Parker Smith, Sloan Swanson, and Sawyer Swanson; JD Atterberry and Macy Atterberry; Isaac Russell, Hope Russell, and Eden Russell. Bonnie is also survived by her sister, Jean Newby of Blanchard, and her brother, Al (Anita) Robertson of Aqaba, Jordan, and her sister-in-law, Sara Robertson, Pawhuska. By the words of her mouth, Bonnie looked forward to a grand, Heavenly reunion with her husband, Corky; daughter, Karla (Harmon) Dilbeck; Parents, Monroe and Hannah; Siblings: Leora (Kenneth) Reed, Leroy (Jean) Robertson, Kendal (Louella) Robertson; and Wayne Robertson. However, “most of all”, she told us, ”I’m ready to see my Jesus.” Two things absolutely defined Bonnie’s life: Faith and Family. Every decision she made and every action she took, filtered through those screens. She was an active member of the First Baptist Church of Barnsdall for more than 60 years. Her home and her table were always open. She was a quiet woman by nature. She didn’t need many words, since her actions and her “fruit” consistently were her testimony. As her son Mike said, “If Mom doesn’t make it into heaven, the rest of us don’t have a chance.”; and as her daughter, Glenda said, “We didn’t lose Mom! We know exactly where to find her.” A family memorial service and burial are planned for a later date. The family requests that anyone wanting to honor Bonnie’s memory, in lieu of flowers, make donations to The Journey Home, 900 NE Washington Blvd., Bartlesville, Ok 74006. The Journey Home is a non-profit hospice house for individuals with 30 days or less of life expectancy. For more information and online giving concerning this organization, go to thejourneyhomeok.org

The family of Bonnie Lou Harmon created this Life Tributes page to make it easy to share your memories.

Send flowers to the Harmon family.