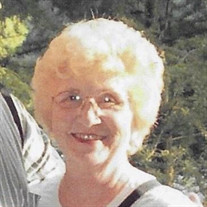 Mrs. Bonnie Jean Glades, 79, of Bartlesville, died at 8:20 P.M. on Tuesday, August 25, 2020 at The Journey Home in Bartlesville. Funeral services will be held at 2 P.M. on Friday, August 28, 2020 in the Stumpff Funeral Home Chapel. Entombment will be in the Memorial Park Cemetery Mausoleum directed by the Stumpff Funeral Home & Crematory. Friends who wish may call for visitation at the Stumpff Funeral Home on Thursday from 4 PM until 8 PM and on Friday from 9 AM until 1 PM. In lieu of flowers the family suggests memorial donations in her name to the Alzheimer’s Association. Mrs. Glades was born on September 9, 1940 at Wichita, Kansas the daughter of Howard William Murphy and Laura Violet (Adams) Murphy. She graduated from Thayer High School at Thayer, Kansas where she was the Valedictorian of the class, attended Pittsburg State and then Coffeyville Community College where she earned an Associates Degree in General Sciences and was an Honors Graduate. She had been employed as a secretary at the COOP Refinery and at Funk Manufacturing and was the Executive Secretary at John Deere. She was the Business instructor and Teacher of the Year at the SEK Vo Tech School until her retirement in 1998. She loved to sew and spend her time loving and enjoying her grandchildren. She loved to share her love of Christmas and holidays with her family and friends. She was married to Fred Glades on July 26, 1958 at Thayer, Kansas. They made their home at Coffeyville, Kansas until moving to California for several years until returning to Coffeyville. They made their retirement home at Grand Lake until 2004 when they settled in Bartlesville to be near their grandchildren. Mrs. Glades is survived by her husband, Fred Glades of the home, two sons, Mike Glades and wife Cheryl of Bartlesville, Dan Glades and wife Ronda of Edmond, Okla., one daughter, Jill Keeler of Bartlesville, a sister, Loretta Holtzman of Chanute, Kansas, her grandchildren, Reid and SaBrina Wilson, Zachary Glades, Lindsay Malatesta, Jerod and Kendra Miles, Kendall Glades, Jacob and Brittany Keeler, Jadyn Keeler and Jesika Keeler, and great grandchildren, Emery Malatesta, Kymber Wilson, Kaylie Wilson, Hanna Wilson, and Rustin Wilson. She was preceded in death by her parents, a brother, Charles Murphy, and sisters, Virginia Hall, Irene Seaver and Betty Montgomery.

Mrs. Bonnie Jean Glades, 79, of Bartlesville, died at 8:20 P.M. on Tuesday, August 25, 2020 at The Journey Home in Bartlesville. Funeral services will be held at 2 P.M. on Friday, August 28, 2020 in the Stumpff Funeral Home Chapel. Entombment... View Obituary & Service Information

The family of Bonnie Jean Glades created this Life Tributes page to make it easy to share your memories.

Send flowers to the Glades family.