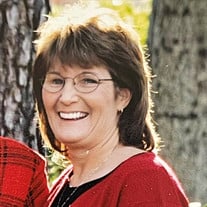 Bonnie Loise Gay passed away on February 15, 2022, in Bartlesville, at the young age of 67. She was born to Delbert Burton White and Georgia Marie (Davis) White on August 22, 1954, in Durant, Oklahoma. She attended College High in Bartlesville until her graduation. On February 23, 1979, she married the love of her life, Terry W. Gay. Bonnie was a successful business owner for over 15 years, owning A Heavenly Touch Cleaning with her sister. She enjoyed sewing, travelling when she could, spending time with her family, and she loved to play slot machines. One of her greatest achievements was completing a 5K at 53 years old. She was known for being the best sister, wife, and mother, and grandmother as well as being everyone’s friend. Bonnie is preceded in death by her father, Dee White of Copan; her mother Marie White and her brother Ted White of Bartlesville; her nephew Jackie Peck of Bartlesville; her aunt Alla Black of Copan; and her brother-in-law Bobby Juliano of Okesa. She is survived by her husband Terry W. Gay of Dewey; her sister Louise Juliano of Dewey; her brother Bruce White and wife Julie of Sapulpa; her eldest son Terry W. Gay Jr. of Collinsville; her middle son Scott Gay of Grove; and her youngest son Dustin Gay of Vacaville, CA; sister-in-law Kathy White of Bartlesville; six grandchildren; Taylor Mitchell, Lancelot Gay, Amber Gay, Alyssa Gay, Bullet Gay, Makayla Gay; and a host of nieces and nephews that was all loved dearly. Visitation will be held Friday, February 18, from 9:00am until 5:00pm at Stumpff Funeral Home and Crematory. A memorial service will be held Saturday, February 19, at 12:00pm, at New Life Pentecostal Church in Bartlesville.

Bonnie Loise Gay passed away on February 15, 2022, in Bartlesville, at the young age of 67. She was born to Delbert Burton White and Georgia Marie (Davis) White on August 22, 1954, in Durant, Oklahoma. She attended College High in Bartlesville... View Obituary & Service Information

The family of Bonnie Loise Gay created this Life Tributes page to make it easy to share your memories.

Send flowers to the Gay family.