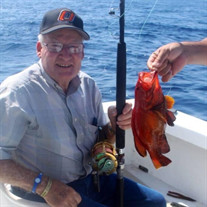 Bobby (Bob) Young age 88 of Bartlesville, OK passed away on July 27, 2021. He was born April 5, 1933 to Edwin and Grace Young in Miles, OK. Bob attended a one room school house in Miles until the 4th grade and then moved to Centralia, OK. Bob was active in baseball and basketball. He helped Centralia High go to the basketball state tournament his senior year. That year he also tried out for a class A professional baseball team in the KOAM league. He made the team, but his dad said “you are finishing school”. He later went on to play semi-pro baseball. After high school, he was employed by Phillips Petroleum Company in Bartlesville. He was drafted in the US Army and served as field medic in the 1st armored division at Ft Hood, Texas. After an honorable discharge from the Army, he returned to his position at Phillips. In 1955, Bob married Patricia Greer and had 2 daughters; Cindy Young of Bartlesville and Sherri Larue of Owasso, OK. In 1988, he married Peggy Horner. Bob was active in girls softball, taking his 12 and under girls to the regional finals in Hartford City, Indiana. In 1980, he created the first ASA 13-15 year old girls softball team in the area, the Washington County Comets. He volunteered his time maintaining softball fields and the Dewey baseball field. He loved every minute of it. In addition to sports, Bob loved wildlife and raising chinchillas. Bob began raising chinchillas in 1966 and was very active in the industry. He served on the Oklahoma and national board of the Empress Chinchilla Cooperation. He judged chinchilla shows and traveled all over the United States. Bob was a hard worker and had a great sense of humor. He enjoyed wood work and improving his property. Bob loved his family and cherished following their activities, especially the granddaughter’s horse shows and grandson’s baseball games. Bob is survived by his wife Peggy Young, daughters Cindy Young and Sherri LaRue, son in law Scott LaRue, granddaughter Terra Burditt and husband Dillon Burditt, grandson Carson LaRue, brother Ed Young and sister Kathy Elder. In lieu of flowers, the family has asked that you consider making a donation to the Cast for Kids Foundation at www.castforkids.org in memory of Bob.

Bobby (Bob) Young age 88 of Bartlesville, OK passed away on July 27, 2021. He was born April 5, 1933 to Edwin and Grace Young in Miles, OK. Bob attended a one room school house in Miles until the 4th grade and then moved to Centralia, OK.... View Obituary & Service Information

The family of Bobby George Young created this Life Tributes page to make it easy to share your memories.

Send flowers to the Young family.