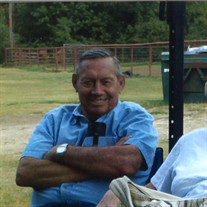 Bobby Lee King passed away on January 29, 2022, in Bartlesville, Oklahoma, at the age of 85. He was born to Clyde L. King and Chloezelle Looney in Tecumseh, Missouri, on December 11, 1936. He attended and graduated from Gainesville High School in Gainesville, MO where he met the love of his life, Loretta Fern Shaw. They were high school sweethearts and were married for 65 years. He later continued his education at Oklahoma State University in Okmulgee, OK where he graduated first in his class. Bobby worked for the Missouri Department of Transportation in Gainesville, MO and later worked for Phillips Petroleum Company in Bartlesville, OK. Bobby was a true outdoorsman and loved fishing and hunting. He was very talented in sports including baseball and basketball. He also enjoyed singing and listening to church music as well as spending quality time with his family. Bobby was a devout Christian and was saved by our Lord and Savior, Jesus Christ, at a Billy Graham Revival in California as a young man. Bobby was preceded to Heaven by his grandmother Alta (Hodgson) King and Blanche (Beard) Looney, his parents Clyde and Chloezelle (Looney) King, his brothers Doyle, Don, and Travis King, and his granddaughter Sarah King. He is survived by his wife Loretta Fern (Shaw) King, his sons: Dwayne and his wife Donna King, Brad and his wife Dianna King, Bryan and his wife Chun King, David and his wife Debbie King, and Paul King; his grandchildren: Travis King, Chad King, Tracy (King) Creek, Jessica (King) Thrash, Jacob and Sonya King, Tosha and Tiffany King, and Ryan King; his 6 great-grandchildren: Kylie, LeAnna, and Cayden Creek, Chloe Thrash, Brooklynn King, and Mason King; and his sister Lodema (King) Bent. Come and Go Visitation will be held Saturday, February 5, from 4 p.m. until 6 p.m. at Stumpff Funeral Home and Crematory in Bartlesville. Romans 8:38-39 For I am convinced that neither death nor life, neither angels nor demons, neither the present nor the future, nor any powers, neither height nor depth, nor anything else in all creation, will be able to separate us from the love of God that is in Christ Jesus our Lord. Exodus 15:2 “The LORD is my strength and my defense; he has become my salvation. He is my God, and I will praise him, my father’s God, and I will exalt him. 1 Peter 5:4 And when the Chief Shepherd appears, you will receive the crown of glory that will never fade away. Psalms 121:1-2 I lift up my eyes to the mountains— where does my help come from? My help comes from the LORD, the Maker of heaven and earth

Bobby Lee King passed away on January 29, 2022, in Bartlesville, Oklahoma, at the age of 85. He was born to Clyde L. King and Chloezelle Looney in Tecumseh, Missouri, on December 11, 1936. He attended and graduated from Gainesville High School... View Obituary & Service Information

The family of Bobby Lee King created this Life Tributes page to make it easy to share your memories.

Send flowers to the King family.