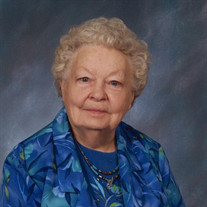 Billie Jean (Roe) Coyne - Smith, age 100 years and 9 months, passed away at 1:51 am on April 21, 2021 in Bartlesville, Oklahoma She was a resident of Bartlesville Health & Rehab. Center with Comforting Hands Hospice assisting. She was born on July 22, 1920 to James Fred Roe and Gertrude Hartsy (Rice) Roe. She graduated from Delaware High School in 1938. She attended Bartlesville Business College. She married Patrick Wm. Coyne in 1939. She and Pat lived in and around the Bartlesville/Dewey area. Billie took a refresher course at the Bartlesville Business College and became Employed by Phillips Petroleum Co. for 22 years in the Chemical Dept. and took early retirement in1978. Pat preceded her in death in 1964. Also preceding her in death was Kenneth Leon Coyne 1975. James Fred Coyne 1986. Robert Ray Coyne 2015. Joyce Coyne 2017 (Daughter-in-law). She is survived by two sons. William Pat Coyne and wife Patty Coyne of Peculiar, MO and Michael David Coyne El Paso, Texas. The Coyne Family Tree consists of Five Children (Sons), Eleven Grandchildren: Twenty-Three Great Grandchildren: Eight Great Great Grandchildren. Billie retired from Phillips Petroleum Company and did volunteer work at the Tuesday House (Mutual Girls Club) for 15 years retiring due to failing health. She was a member of the Harvestime Assembly of God in Dewey. In 1967 Billie married Carl J. Smith. They lived in Dewey, a few years later, moving to Lake Hudson near Adair. She worked five years at Driscopipe (Subsidiary of Phillips Petroleum) in Pryor. In 1990 they returned back to Bartlesville, to be near family, as Carl's health had declined. He preceded her in death in 1995. Preceding their deaths was Ray Dean Smith 1995. Surviving Siblings are Bill Eugene Smith of Dewey, Thomas Leroy Smith of Eufaula, OK. Phyllis (Smith) Reynolds and husband Tom Reynolds of Dewey. Carlene F. (Smith) Hobbs and husband David Hobbs of Gilmer, TX. The Smith's side of the family tree Five Children: Eight Grandchildren: Eleven Great Grandchildren: One Great Great Grandchildren. Funeral services will be held at 10 A.M. on Friday, April 23, 2021 in the Stumpff Funeral Home Chapel with Pastor Eugene Hewitt of reNEW Church in Dewey officiating. Interment will be in the Ochelata Cemetery directed by the Stumpff Funeral Home & Crematory. Visitation for family and friends will be from 9 AM until 8 PM on Thursday at the Stumpff Funeral Home and the family will receive guests for visitation at the funeral home on Thursday from 5 P.M. until 7 P.M. The family suggests memorial donations in Mrs. Smith’s name be made to Comforting Hands Hospice, 1366 S.E. Washington Blvd., Suite A, Bartlesville, Oklahoma 74006.

Billie Jean (Roe) Coyne - Smith, age 100 years and 9 months, passed away at 1:51 am on April 21, 2021 in Bartlesville, Oklahoma She was a resident of Bartlesville Health & Rehab. Center with Comforting Hands Hospice assisting. She was born... View Obituary & Service Information

The family of Billie Jean (Roe) Coyne-Smith created this Life Tributes page to make it easy to share your memories.

Send flowers to the Coyne-Smith family.