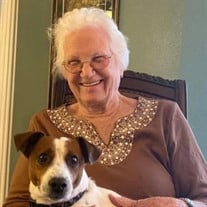 Betty Ann Rodgers, passed away surrounded by family in Copan, Oklahoma on Wednesday, January 12, 2022, at the age of 85. Betty was born to John Pranger and Ellen Stark Pranger in Waynoka, Oklahoma on December 25, 1936. She grew up in the river bottom around Broken Arrow, where one of her favorite past times was herding the chickens into the house when the river flooded so they wouldn’t float away and pestering her brother David, whom she idolized. They moved to the 4-S ranch in Ochelata in 19454, a town she grew to love and serve, either through her church or as Mayor, as she built her life. She attended Ochelata High School graduating in 1958, a moment she was very proud of. She was blessed with two beautiful girls, Susie and Diane, that grew up on the ranch and later moved to their own home in Ochelata in 1970. Soon after high school she started working at Herman Studios for $1/hr. In a moment of rebellion, she would argue one of few moments of rebellion, she left Hermans, determined to build a life for her and her kids. She then took a job with Phillips Petroleum in 1972, where she became known for her sense of style and was called the $100 a month millionaire. In May of 1975 she was 39 years old and went to the Moose Lodge, set up on a date by friends, to meet a young(ish) man that would quickly become the love of her life named Hugh Rodgers. In October of that same year, she married that man in the living room of their home thus starting a new chapter filled with love, adventure, and many rounds of pitch. Betty loved to travel with her husband, spending many days in their motorhome traveling all over the United States, many times with their grandchildren in tow. She had nerves of steel, ever the calm and supportive wife as Hugh drove through windy roads and sometimes into tree branches…. other cars.. and even onto the sandy Texas beaches getting stuck for hours. Some might call her a saint, but Hugh would argue that her patience was because she knew that her driving was worse. Evidenced during a snowy trip in Colorado when he ended up in the floorboard of the backseat. In addition to traveling, she enjoyed quilting, particularly with her friends Barbara, Mary, Beth and Josie, watching birds, attending estate sales on Saturdays with with her family or Jack and Emily, playing cards or dice with anyone who would, putting worms on hooks for her grandchildren and great grandchildren while fishing and caring for her Guineas. Betty was preceded in death by her father, John Pranger, a trusty level-headed loving man; mother, Ellen Stark Pranger, a tough and strong woman; brother, David Pranger, a true policeman and jokester; husband, Hugh Rodgers, a gentle giant that loved her deeply; and her granddaughter, Marissa. She is survived by children, Susie (Ron) Reese of Idaho, Diane (Mike) Carver of Copan, Pam (Warren) Peck of Copan, Kevin Rodgers of Madill, Shari (Randy) Anderson of Oglesby, Jennifer (Jeff) Fenstermaker of Bartlesville; 19 grandchildren; 36 great-grandchildren. Services will be held at the Ochelata Methodist Church on Saturday, January 15, 2022, at 10 a.m. and is under the direction of Stumpff Funeral Home and crematory. In lieu of flowers, please make all memorial contributions to the Ochelata Methodist Church.

Betty Ann Rodgers, passed away surrounded by family in Copan, Oklahoma on Wednesday, January 12, 2022, at the age of 85. Betty was born to John Pranger and Ellen Stark Pranger in Waynoka, Oklahoma on December 25, 1936. She grew up in the river... View Obituary & Service Information

The family of Betty Ann Rodgers created this Life Tributes page to make it easy to share your memories.

Betty Ann Rodgers, passed away surrounded by family in Copan,...

Send flowers to the Rodgers family.