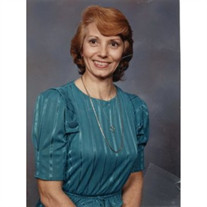 Funeral services for Betty Marie Jones, 81 of Skiatook, Oklahoma were held Friday, May 26, 2017 at 10:30 a.m. at Peters-Stumpff Funeral Home Chapel with Russell Hill officiating.             Interment in Osage Garden Cemetery, in Skiatook, Oklahoma was under the direction of Peters-Stumpff Funeral Home. Musical selections for the service were "Amazing Grace and "Go Rest High On That Mountain".             Betty passed away on May 23, 2017 in Collinsville, Oklahoma. She was born January 21, 1936 in Leroy, Kansas to Homer Joseph and Violet Eleanor (Barnow) Lovesee. She lived in Colorado as a young child, attended grades 1 through 8 in Lakin, Kansas. When her father died the family moved to Iola, Kansas and then to Wichita, Kansas.  She attended North High and graduated from West High school in Wichita.             She had lived numerous places around the country: Wichita; Kansas; Florida; Hawaii; Ardmore and Oklahoma City, OK, Rapid City, South Dakota, Georgia, Missouri and Ohio. Lived in Childress, Texas from January 1969 to December 1972 where she was co-owner of Tips Drive-In Restaurant. Previously employed at National Welding Supply and Sisemore-Sack-Sisemore in Tulsa before being employed at Peters-Stumpff Funeral Home from May 1986- October 1997 and then occasionally filled in part time.  She was a member of Skiatook Church of Christ.  She had been a resident of Skiatook since 1977.             She married Dale Jones August 20, 1993 in Skiatook where they made their home. She enjoyed spending time with her family, reading, doing cross-stitch, crocheting and loved boating on Skiatook Lake Betty is survived by a daughter Lisa Martin and husband Jack of Skiatook; two sons: Guy Stewart of Skiatook; David Stewart and wife Sharon of Grove; two step sons: Jeff Jones and Jay Jones, a stepdaughter Jill Jones, three grandchildren: Shane Brown and wife Sydney of Tulsa; Melissa and Josh Williams of Grove; Lindsay Stewart of Springdale, Arkansas; 6 great grandchildren: Gage Farmer, Mason Philpott, Whitney and Jada Williams, Corrello and Blythe Brown, a sister in law Nancy Lovesee, several nieces, nephews and cousins.   She was preceded in death by her husband Dale, her parents, step father Charles Parker, a brother Donald Lovesee and granddaughter Allison Philpott.

The family of Betty Marie Jones created this Life Tributes page to make it easy to share your memories.