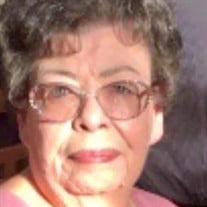 Betty Lou Bevard-Bleichner, 75, of Bartlesville, died at 8:10 A.M. on Sunday, April 4, 2021 at The Journey Home in Bartlesville. Funeral services will be held at 1 P.M. on Friday, April 9, 2021 in the Stumpff Funeral Home Chapel with Pastor Brian Schexnayder of the Crossroads Baptist Church officiating. Interment will be in the Harrisonville Cemetery in Montgomery County, Kansas directed by the Stumpff Funeral Home & Crematory. Visitation for family and friends will be at the Stumpff Funeral Home until 8 PM on Wednesday, from 9 AM until 8 PM on Thursday and from 9 AM until 12 Noon on Friday. Betty was born on September 16, 1945 at Independence, Kansas the daughter of Leon “Pete” Barker and Anna Pauline (Spalding) Barker. She grew up and received her education at Independence, Kansas and then attended Independence Community College for two years. She was married to John Franklin Bevard on July 19, 1964 in Independence. They made their home in Independence until moving to Bartlesville in 1967 where she was active as a homemaker and Mr. Bevard was employed by the Bartlesville Police Department in 1968. She was employed by the City of Bartlesville in January of 1982 in accounting and finance and then transferred to the Bartlesville Police Department Records Division in 1998 where she remained until her retirement. Mr. Bevard preceded her in death on October 30, 2008. She was married to Edward Jerome Bleichner on April 7, 2011 in Las Vegas, Nevada and they have made their home in Bartlesville since that time. She loved to travel, go camping, playing blackjack and especially “Bingo”. She was very sociable and loved to meet people. Survivors include her husband, Edward Jerome Bleichner of Bartlesville, one son, Rocky Bevard and wife Niki of Bartlesville, one daughter, Shani Stark and husband Mont of Bartlesville, three step sons, John Bleichner of Springfield, Missouri, Cody James Bleichner of California and Robert Bleichner of Tulsa, One brother Bob Barker and wife, Susan of Vero Beach, Florida, two grandchildren, Ryan Bevard and wife Sophia and Ashley Bevard, two great grandchildren, Adilyn Bevard and John Bevard. In lieu of flowers, the family suggests memorial donations be made to The Journey Home, 900 N.E. Washington Blvd., Bartlesville, Oklahoma, 74006.

Betty Lou Bevard-Bleichner, 75, of Bartlesville, died at 8:10 A.M. on Sunday, April 4, 2021 at The Journey Home in Bartlesville. Funeral services will be held at 1 P.M. on Friday, April 9, 2021 in the Stumpff Funeral Home Chapel with Pastor... View Obituary & Service Information

The family of Betty Lou Bevard-Bleichner created this Life Tributes page to make it easy to share your memories.

Send flowers to the Bevard-Bleichner family.