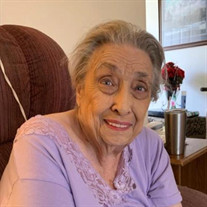 Barbara Valerie Hall, 85, passed unexpectedly at Ascension St. John Medical Center on December 23, 2021. Barbara was born on January 10, 1936 in Tulsa, OK to Donald P. Fries and Margaret Marie Fries. As a young woman she worked as a nurse’s aide, then she worked various housekeeping positions, and lastly she ran her own in-home childcare center. Later she retired and was a homemaker. Barbara married Murlin James Hall on December 1, 1951. They made their home in Bartlesville until Murlin passed away in November 1989. In December 1992 Barbara married Al Schmitz. They also made their home in Bartlesville until Al passed away in June2011. Barbara was a member of the Crossroads Baptist Church of Bartlesville where she ritually attended every Sunday morning, Sunday night and Wednesday night until she was no longer able to attend due to health reasons. Barbara is survived by her daughter: Marie Smith of Dewey; daughter, Rhonda Amos of Bartlesville; daughter, Teresa Jacobson and husband Rickie of Bartlesville; son, Mark Hall and wife, Rhonda of Bartlesville; daughter, Betty Smith and husband, David of Dayton, Ohio; 9 grandchildren; 19 great-children; and 7 great-great grandchildren. She was preceded in death by her first husband and father to their children, Murlin Hall; her second husband, Al Schmitz; her son, Rocky Hall; her brother Dwight Fries; her parents, Donald and Marie Fries; and her great-grandchild, Alex Parrett. She was truly loved by all, and will dearly be missed by her family and friends. There will be a memorial service held at the Crossroads Baptist Church on Tuxedo Blvd., in Bartlesville, OK on Saturday, January 8th at 1:00 pm.

The family of Barbara Valarie Hall created this Life Tributes page to make it easy to share your memories.

Send flowers to the Hall family.