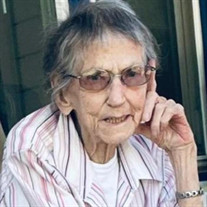 Born at Pryor, OK on September 11, 1934, to Fay & Ada Pearl Garner, Ardena was an avid stay-at-home mom whose passion was her children. She married J.D “Corkey” Scroggins on November 19, 1955, although they were married many years, they weren’t blessed with any children until eleven years after they married. On September 30, 1967, they had a son Larry Dean Scroggins and five years later December 18, 1972, they were graced with a special needs daughter, Donna Faye Scroggins. Ardena was highly active in the community through various organizations including The American Legion Post 105, The Eagles, The Moose Lodge, ARC Group Homes, and The Special Olympics. She enjoyed going to and taking part in Bingo, as well as working part-time at Lollipop Land Inc., helping look after children and watching them grow. Throughout the years, she had a part in raising many children around the community. Ardena and Corkey have always loved holiday times when the family would get together, this would consist of their two children, five grandchildren, and six great-grandchildren. Ardena passed away at The Journey Home on May 25, 2022, surrounded by her son and the love of her family. She was proceeded in death by her husband: J.D. “Corkey” Scroggins, her parents: Fay and Ada Pearl Garner, three sisters: Louise Land, Edith Coker, and Nancy Williams, Brother-in-law: Coy Scroggins, Four Sisters-in-laws: Wanda Doyle, Edna May Holt, Rhoda Johnston, and Faye Johnson, and one granddaughter: Amber Myers. She is survived by two children: Larry and Donna Scroggins, One Sister: Thelma Cook, Five grandchildren: Sarah Myers, Jotham Myers, Jericho Myers, Tiffany Scroggins, Tyler Scroggins, and Jessica Granger, and six great-grandchildren: Lili Scroggins, Logan Myers, Will Scroggins, Noah Wood, Amilia Scroggins, and Thurman Myers-Downing, One sister-in-law: Nora Lee Whitaker, and many nieces, nephews, and cousins. She will be greatly missed by many people!!

The family of Athaleen "Ardena" Scroggins created this Life Tributes page to make it easy to share your memories.

Send flowers to the Scroggins family.