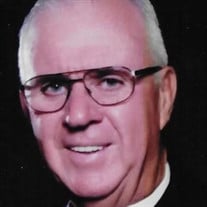 Mr. Arlin Wendell Stacy, 81, died at 7:22 P.M. on Saturday, August 1, 2020 at his home in Collinsville. Funeral services will be held at 11 A.M. on Thursday, August 6, 2020 at the Owasso First Assembly of God Church. Graveside services will be held at 2 P.M. on Thursday at the Floral Haven Memorial Gardens in Broken Arrow directed by the Stumpff Funeral Home & Crematory. Visitation for family and friends will be at the Stumpff Funeral Home in Bartlesville on Tuesday from 1 PM until 8 PM and on Wednesday from 9 AM until 8 PM. The Stacy family will receive guests at the funeral home on Wednesday from 6 PM until 8 PM. Wendell was born in on May 13, 1939 in Independence Community, Oklahoma the son of Arlin Martin Stacy and Bertha Oleta (Elder) Stacy. He attended elementary schools in the Independence Community and Yuba City, California, junior high in Glendale, and high school at Heavener, Oklahoma. He later attended Carl Albert Junior College at Poteau, Oklahoma and Northeastern State University at Tahlequah and had obtained his Masters Degrees. He was married to Dorothy L. Corp in Locust Grove, Oklahoma on December 23, 1960. Wendell has been employed with Smittle Grocery at Heavener and Carnation Milk Company at Poteau. In 1972 he became a teacher at Wann, Oklahoma and in 1973 became a teacher and principal of the Dewey Junior High School until his retirement in 1994. He was also in charge of running the time clock for the junior high and high school football and basketball games. Wendell was an avid garage saler and was often the first one arriving at garage sales. He also loved auctions, collecting western items and metal lunch baskets. He loved OU football, the St. Louis Cardinals, Dallas Cowboys, Thunder basketball and loved to cruise. Wendell also loved attending local high school athletic events and never missed one of his grandchildren’s games. He served in the United States Army from August 10, 1960 at Ft. Lewis Washington until receiving his Honorable Discharge on August 9, 1964. He was a lifelong member of the Assembly of God Church where he served as a church board member, Sunday School superintendent and teacher, bus driver, visitation leader and Royal Ranger leader. He was loved by everyone he met and was known for his love of people including his cousins with whom he stayed in close touch with. Mr. and Mrs. Stacy made their home in the Bartlesville/Dewey area from 1972 until 2007. They now reside in Collinsville. Wendell is survived by his wife of 59 years, Dorothy of the home, a son, Arlin and wife Holly Stacy of Collinsville, Okla., a daughter, Angela and husband Don Raleigh of Pryor, Okla., 8 grandchildren and 6 great grandchildren, Aubrey and Michael Ballard and son, Owen of Broken Arrow, Alissa Stacy and daughter Chloe and son Ryker of Maize, Kansas, Sarah and Chase Culver and daughter Reagan of Andale, Kansas, Garrett Stacy, Meredith Harkins, Abby Stacy, and Payton Stacy all of Collinsville , Trent and Carolyn Raleigh and two sons, Luke and Nicholas of Evergreen Park, Illinois, as well as his cousins with whom he remained close. He was preceded in death by his father and mother.

Mr. Arlin Wendell Stacy, 81, died at 7:22 P.M. on Saturday, August 1, 2020 at his home in Collinsville. Funeral services will be held at 11 A.M. on Thursday, August 6, 2020 at the Owasso First Assembly of God Church. Graveside services will... View Obituary & Service Information

The family of Mr. Arlin Wendell Stacy created this Life Tributes page to make it easy to share your memories.

Send flowers to the Stacy family.