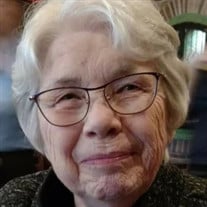 Anna Marie Payton Whitlock, 78, of Verdigris Oklahoma, passed away Monday, February 15, 2021 after a brief illness. Anna was born in Bartlesville, Oklahoma where she grew up and graduated from Bartlesville College High School. She enjoyed upholstering, camping, football, and Nascar racing, but most of all she loved spending time with her family. She made her home in the Claremore area and worked at the Claremore Walmart for 25 years before retiring in 2016. Anna is survived by 2 sisters, Martha Engleking and Laura and Gordon Higbee both of Bartlesville, Ok and 1 brother JR and Margie Payton of Ochelata, Ok. Anna is also survived by 1 daughter, Becky and Mathew Jones of Verdigris, Ok and 2 sons, James Randall Whitlock of Hobart, Ok, and Frank Whitlock Jr. of Dewey, Ok. Anna was known as Nanny to her 4 grandchildren, Christina Whitlock of Broken Arrow Ok, Brody Whitlock, Makayla Whitlock, and Lukas Whitlock of Claremore, Ok as well as 3 great-grandchildren, Brayden Wilson and Cloie Peterson of Broken Arrow, Ok, and Kody Ray Whitlock of Claremore, Ok. She is also survived by 6 nieces Gay Wheeler and Leah Wheeler of Copan, Ok, Mary and Doug McClain of Fort Smith, AR, Jamie and Thomas Keener of Bartlesville, Ok, Shelia and Chris Jenkins, of Crowley, TX, Lisa Engleking of Oklahoma City, Ok, and 1 nephew, Bryan and Sara Freeman of Bartlesville, Ok. As well as several great-nieces and great-nephews. Anna is preceded in death by her parents James Chester and Eliza Martha Payton and a brother in law Albert Engleking. Graveside services will be held at the Nowata Memorial Cemetery in Nowata, Oklahoma on March 5th at 2 pm.

Anna Marie Payton Whitlock, 78, of Verdigris Oklahoma, passed away Monday, February 15, 2021 after a brief illness. Anna was born in Bartlesville, Oklahoma where she grew up and graduated from Bartlesville College High School. She enjoyed upholstering,... View Obituary & Service Information

The family of Anna Marie Whitlock created this Life Tributes page to make it easy to share your memories.

Send flowers to the Whitlock family.