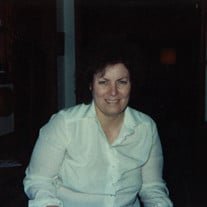 Anna Marie Nelson, 73, of Bartlesville, Oklahoma, died February 24, 2021, in Santa Monica, California. Anna was born February 25, 1947, in Bartlesville, Oklahoma, to parents Franklin and Genevieve (Goodrich) McGonigle. She attended school in Bartlesville but transferred to Nowata High School during her senior year in 1966. Anna attended college at NEO in Miami, Oklahoma for a short time. Anna started work in the mailroom at Phillips Petroleum Company in 1968. Over her career of 32 years at Phillips, she rose from a mailroom clerk to become an executive secretary. She retired from Phillips in 2000. While working in the mailroom, she met Terry Nelson. The two fell in love and got married on August 29, 1969 at the First Methodist Church in Bartlesville. In 1970, she gave birth to her only child, a son, Stephen Nelson. The couple has been married for 51 years. Anna will be deeply missed by both Terry and Stephen. Anna enjoyed celebrating and decorating for the holidays. She also, in her younger days, loved going to Branson and seeing the shows. In fact, Terry and Anna honeymooned in Branson. Anna was a member of East Cross United Methodist Church and was a Sunday and Bible School teacher many years ago. Anna was preceded in death by her parents and an aunt and an uncle. She is survived by her husband Terry, of the home, and her son, Stephen Nelson, of Glendale, California. A graveyard service will be held on Thursday, March 11 at 3pm at Memorial Park Cemetery.

The family of Anna Marie Nelson created this Life Tributes page to make it easy to share your memories.

Send flowers to the Nelson family.