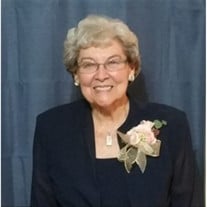 Anis (Ann) Lou Williams, was born on February 16, 1934, to her father, Bradford Jackson Lane, and her mother, Minnie Opal Denny, while living near Qualls, Oklahoma. On November 1, 2018, the Lord took Ann home at 84 years of age. She was residing in Owasso, Oklahoma at the time of her passing.   Ann was proudly married to Dale Kenyon Williams, Sr., for thirty-three (33) years, from 1951 until his death in 1984. During their married years, Ann earned her BA in Secondary Education from the University of Tulsa. She went on to earn her master's degree in Literature/English at Northeastern State University in Tahlequah, Oklahoma.  Ann was a dedicated educator and a loving mentor to her students. She taught Ninth Grade English and Literature; and later in her career, she taught Senior High English at Skiatook High School. After twenty-two (22) years and over 2000 students, Ann retired in 1994.  While retired she worked as a Librarian for the Tulsa City/County Public Library, until her second retirement.  Ann was not the type to publicize her accomplishments but she was awarded Teacher of the Year and received honors from the Governor and the Legislature.  Ann devoted herself and her time to her spiritual and earthly family. She spent an inordinate amount of time watching and helping her grandchildren grow into adults. Ann also loved to travel, both throughout the US and internationally, She loved to garden, to read, to visit and care for those she lovingly referred to as "the old folks" and shut-ins from the Skiatook Church of Christ.  Ann was preceded in Death By:  The love of her life (her husband), Dale K. Williams, Sr., her parents, Dale's parents, and her youngest brother, Wymbert Lane.  Ann is Survived By:    Her Sister, Wanda (Jackie) Ballard, Her oldest brother, Jerry Lane, Her baby Sister, Marylin (Sue) Bynum and Michael Lane; Her four (4) sons: D. Kenyon Williams, Jr. and wife Teresa, Bradford R. Williams and wife Teresa, Lynn Lane Williams and wife Candy, and Bruce M. Williams and wife Linda; Her Grandchildren D. Kenyon Williams, III, Kristen Patel, Kara Wadsworth; Bradford R. Williams, II, Alexander D. Williams, Lindsey Reid; Aubrey Williams, Bruce M. Williams, II, Spencer Sheridan Ramby; Leslie Anne Thomason, Lauren Ashley Gramling, Lynn Lane Williams, II; and, many more great-grandchildren.   Memorial/Funeral Services at:    Skiatook Church of Christ, 1900 West Rogers Boulevard, on November 9th 2018 at 11AM.  Place of Interment:    Osage Gardens Cemetery Skiatook, OK.Open Visitation at Peters-Stumpff Funeral Home Chapel Skiatook, Nov. 6 & 7,Tues-Wed. 8a.m.-5p.m. , Nov. 8 Thurs. 8a.m.-8p.m.

Anis (Ann) Lou Williams, was born on February 16, 1934, to her father, Bradford Jackson Lane, and her mother, Minnie Opal Denny, while living near Qualls, Oklahoma. On November 1, 2018, the Lord took Ann home at 84 years of age. She was residing... View Obituary & Service Information

The family of Anis L. Williams created this Life Tributes page to make it easy to share your memories.