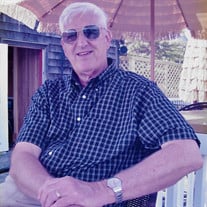 Allan Jack Bunge, age 82 passed on to his heavenly home on November 26, 2019 at the Journey Home. A celebration of life service will be held Saturday afternoon, December 7th at 2:00 p.m. at East Cross United Methodist Church with the Reverends Jeff Burris and Chad Perceful officiating. The family will receive friends following the service. Al was born in Riverside, NJ on November 24, 1937, the son of Eldridge and Clarice Bunge. He graduated from Palmyra High School in 1956 and attended the University of Maryland on a basketball scholarship. He was selected All-ACC second team as a sophomore and junior and first team as a senior. In 1958 he was a member of the first ever ACC Maryland Championship Team and was ranked as high as 5th in the nation that year. Many of Al’s records still stand in the record books today especially in the areas of scoring and rebounding even though in those years, freshmen were not allowed to play on the varsity. Upon graduation, Al was drafted seventh overall, but first choice of the NBA Philadelphia Warriors. He turned down their offer and instead chose to play for the Phillips 66ers and accept a job opportunity with Phillips Petroleum Company of Bartlesville, OK. Before leaving the Maryland area he married his college sweetheart, Barbara Grimes, in August of 1960. They had been happily married for 59 years. Al began his Phillips career in the marketing department in Bartlesville in 1961 and played for the 66ers for two years. While in sales, the family was transferred to Syracuse, NY, Madison, NJ, Atlanta, GA and finally returned to Oklahoma in 1976. In 1980, he transferred to the Purchasing Department of Phillips and remained there until his retirement in 1992. Al was a member of Boy Scouts, President of the Lilburn Swim Club in Georgia, President of Blazer Sports in Bartlesville for several years and acted as a coach for two of the girl’s fast pitch softball teams for many seasons. While in Georgia, he was active with the Lilburn United Methodist Church and continued his involvement on many church committees at East Cross in Bartlesville. Since his retirement he devoted endless hours to Mutual Girls Club and their resale shop, Tuesday House. He was a favorite of many of the customers who shopped there as well as the other volunteers. However, there was still time for travel across the US, an occasional cruise and some RVing with friends, various cultural and musical events in the area and his favorite…supporting his family and all their sporting achievements. He was extremely proud of his family and all their accomplishments. Mr. Bunge is survived by his wife, Barbara, of the home, two daughters, Kim Sanchez of Springdale, AR and Tracy Bunge of Lawrence, KS and two grandchildren, Krista Sanchez N’Gom of Glenpool, OK, her husband Clement, their son, Lincoln and Michael Sanchez of Tulsa, OK. He will be greatly missed by all who knew and loved him. In lieu of flowers a memorial has been established with Mutual Girls Club, 3401 Price Road, Bartlesville, OK 74003 or the Journey Home, 900 Washington Boulevard, Bartlesville, OK 74006

Allan Jack Bunge, age 82 passed on to his heavenly home on November 26, 2019 at the Journey Home. A celebration of life service will be held Saturday afternoon, December 7th at 2:00 p.m. at East Cross United Methodist Church with the Reverends... View Obituary & Service Information

The family of Allan Jack Bunge created this Life Tributes page to make it easy to share your memories.

Allan Jack Bunge, age 82 passed on to his heavenly home on November...

Send flowers to the Bunge family.