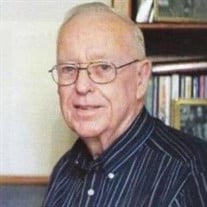 Alfred Clayton (AC) Holden left this life September 19th, 2020. He was born in Wynona, Oklahoma May 21st, 1935 to Wiley James and Beulah (Middlebrooks) Holden. He received his education in the public schools of Oklahoma and Texas. He married Annie Irene Clark September 27, 1953. They were just a few days shy of celebrating their 67th wedding anniversary at the time of his passing. AC was a licensed Insurance Agent for over 51 years and the owner of an Independent Insurance Agency. He was very active in civic activities throughout most of his life . He served as manager of the Dewey Chamber of Commerce from 1966 to 1973. He was also Secretary/Treasurer of Green Country from 1967 to 1973. In addition, he was a member of the Kiwanis Club, Masonic Lodge, and Bartlesville Area Chamber of Commerce, A devoted follower of Christ, AC had been a member of several area churches including Bluestem Baptist Church and the First Church of God in Dewey, and also the First Baptist Church of Bartlesville. After his move to Montgomery, TX he became a member of First Baptist Church of Conroe. AC served in the Oklahoma House of Representatives from 1972 to 1988. He served as Chairman and a member of several committees during his 16 year political career. He also rose to the rank of Assistant Majority Floor Leader during his tenure in the state legislature. He authored several important pieces of legislation that still influence the state of Oklahoma today. In 1988, AC started a tourism promotional program in the Rio Grande Valley of Texas to attract the thousands of “Winter Texans” to stop and visit tourist attractions in Oklahoma. He and Ann spent numerous winters in Texas promoting Oklahoma. In 1994, AC served as President of the Tom Mix Museum in Dewey, OK. In 2008, he was honored for his 40 years of service by the Board of Directors of the Tom Mix Museum. In February, 2019 AC and Ann moved to Montgomery, TX to enjoy the warmer winters. At the time of his death they were residing in Live Oak Senior Care Center. AC is survived by his wife Ann, sons Alfred Clayton, Jr. (Pam Holden) of Montgomery TX, Terry Holden of Norman, OK, Ray Holden (Sammie) of Montgomery, TX and a daughter, Janis Perrault (Jack) of Yukon, OK., a sister Joanne Thomas of Corpus Christi and a brother George R. Holden of Grove, OK., numerous nieces, nephews and cousins. He is also survived by 11 grandchildren, and 18 great grandchildren. He is preceded in death by his parents, five siblings; Wiley, Aleene, Jack, Marie, Russell and a granddaughter, Megan Mary Perrault. A true patriarch of his family, as a husband, father, father-in-law, grandfather and great grandfather. He will be lovingly missed on this earth until the day we are joyfully reunited. Visitation will be held Thursday evening, September 24th from 5 to 7 pm at Stumpff Funeral Home in Bartlesville. Funeral services will be held Friday, September 25th at 10 AM at First Baptist Church of Bartlesville. Interment will follow at Powell Cemetery in Hominy, OK.

Alfred Clayton (AC) Holden left this life September 19th, 2020. He was born in Wynona, Oklahoma May 21st, 1935 to Wiley James and Beulah (Middlebrooks) Holden. He received his education in the public schools of Oklahoma and Texas. He married... View Obituary & Service Information

The family of Alfred Clayton "AC" Holden created this Life Tributes page to make it easy to share your memories.

Send flowers to the Holden family.