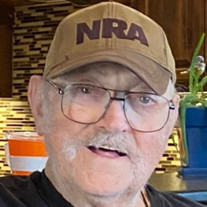 Albert Edgar Hough, of Bartlesville, passed away peacefully Thursday morning, October 29, 2020 at the home of his son Doug Hough. Al was born on September 13, 1926, to Clara Etta Swindell Hough and Jessie Travis Hough in the town of Colgate, OK. He was the 5th of 11 children. His family moved around between OK, where they picked cotton, and Texas where they cut Cedar trees. Albert joined the Army in 1945 and was honorably discharged in 1947. After coming home to OK, he met Pauline Ellis and they were married on January 24, 1948. Pauline preceded him in death in March 2018 after 70 years of marriage. Pauline and Al had three children, Judy Kay, Douglas Albert and Dan Edward. Albert was a successful home builder in the Bartlesville area for many years. His business Hough Homes, later became a partnership with his sons, ADD Homes. With the help of his wife and children, he also farmed and was in the cattle business. Albert was preceded in death by his parents, his wife, Pauline Hough, his daughter, Judy Kay Hough Brewster, and 8 brothers and sisters. He is survived by his two sons, Doug Hough and girlfriend Mary Dills of Bartlesville, Dan Hough and wife Patty of Nowata, 7 grandchildren, Brandon Hough and wife Rachel of Bartlesville, Duke Reed and wife Holly of Franklin, TN., Corey Hough and wife Joey of Bartlesville, Sabrina Willig and husband Chance of Dewey, Bo Reed and wife Lilli of Tulsa, Cody Hough and wife Kimmy of Bartlesville, and Cooper Hough and by 10 great grandchildren, Michael Hough, Kody Hough and fiancee’ Hannah Hendryx, Emalee and Anna Hough, Charlie and Davy Reed, Hank and Griffin Hough and Lane and Kali Willig. In lieu of flowers a memorial fund has been established and those who wish may send their contributions to Comforting Hands Hospice, 1366 S.E. Washington Blvd., Suite A, Bartlesville, Oklahoma 74006 Visitation for family and friends will be at the Stumpff Funeral Home from 9 AM until 8 PM on Saturday and Sunday and on Monday morning from 9 AM until 12 noon. Graveside services will be held at 2 P.M. on Monday, November 2, 2020 at the Oglesby Cemetery with Pastor David Bycroft of the East Bartlesville Christian Church officiating. Funeral services and interment are under the direction of the Stumpff Funeral Home & Crematory.

Albert Edgar Hough, of Bartlesville, passed away peacefully Thursday morning, October 29, 2020 at the home of his son Doug Hough. Al was born on September 13, 1926, to Clara Etta Swindell Hough and Jessie Travis Hough in the town of Colgate,... View Obituary & Service Information

The family of Albert Edgar Hough created this Life Tributes page to make it easy to share your memories.

Send flowers to the Hough family.